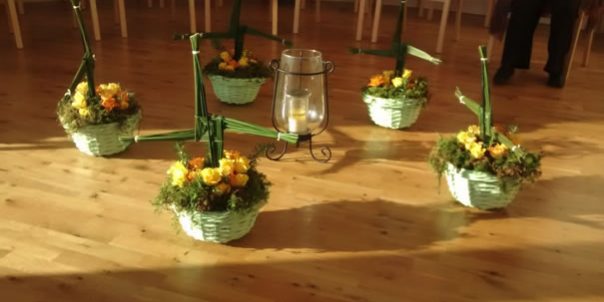 In the Celtic year February 1st is the first day of Spring, the date of the great pre-Christian festival of Imbolc and it is also the feast day of St Brigid. This time of year sees the awakening of nature and the birth of new life e.g. spring lambs and calves. Legends associate Brigid with cattle and sheep, dairy cows and crops.
St Brigid is the female patron saint of Ireland and together with Saint Patrick and Saint Colmcille is one of the three national patrons. It is thought that St Brigid was born at Faughart in County Louth. Brigid’s father was a nobleman called Dubtach and her mother was a slave called Brocessa and she was a Christian. There is very limited historical evidence from the period when she lived but it is believed that she probably lived in the period 450-550AD. She was renowned for her kindness and generosity and she chose to devote her life to the service of God. She was instrumental in establishing a church and convent in Kildare (the Church of the Oak) She later presided over the great double convent and monastery at Kildare which were founded around 470AD. She was acknowledged as a saint from around the 7th Century.

The making of Saint Brigid’s crosses is a very ancient feature of the traditions associated with St Brigid and it is also the most common custom associated with the saint in Ireland. The explanation given of the custom was that the saint made this cross when she was comforting a dying man who wished to convert to Christianity and she placed it in his hands.

When I was a child growing up on a farm in rural Ireland every year on the eve of St Brigid’s Day my father would go out around the fields and collect a bundle of rushes and bring them into our home. The rushes were spread on the floor and only green rushes were used in making the crosses, brown rushes were discarded. He showed us how to make the St Brigid’s Cross and then we made several of them and one was displayed in the kitchen and he would put one out in farm outhouses for protection of the cattle and pigs. Then every year we continued the tradition of making the St Brigid’s Cross. Working as a teacher I taught young people in schools how to make the cross and I make some every year and display in my home and give the others to friends or people who ask me for one. There are different types of crosses which can be made including a three-armed cross which was usually displayed in outhouses rather than in the home. They were placed in cattle byres and in the dairy. The most common type is one with four arms radiating from the centre. The crosses are displayed for the whole year and some people keep them from year to year and add new ones to their collection.
People believed the St Brigid’s cross brings benefits to their family, the animals, the crops, their home and farm buildings, that they had protection from disease and adversity.
St. Brigid was an amazing woman and her remains are buried in Downpatrick, County Down in a grave with St Patrick and St Colmcille. Why not book a tour to see the grave of St Brigid and the surrounding countryside. https://sustainablejourneysireland.com/guided-tours-strangford-lough/st-patricks-country/