Columbanus was born in the mid 6th Century and raised in County Carlow. It is thought received his spiritual formation on Cleenish island in County Fermanagh and entered monastic life in Bangor County Down. Monasteries were centres of learning and he may have been head of the monastic school in Bangor. In middle age he left Bangor with twelve monks and travelled through Europe establishing a string of monasteries in France, Austria, Italy He died on 23 November 615 and is buried in Bobbio in Italy. His mission was to spread Christianity across Europe. He is regarded as the patron saint of Europe. He is the first Irishman to have a biography written about him.

Every year in November a festival is held in Bangor, County Down commemorating the life and legacy of Columbanus. This year’s festival was very well attended with visitors from the Republic of Ireland and France. The programme began on Saturday morning with two talks on themes relating to Columbanus. Marie Foley, an educator and former senior civil servant spoke on the subject of our monastic heritage from a local perspective. She shared her extensive knowledge of local monastic history, for example, the monks had to know 350 hymns by heart to participate in singing. The monks sang through the night and it is thought that there was continuous singing throughout a 24 hour day due to the large number of monks at Bangor. It is thought that St Patrick came here and that he had a vision of hearing the angels singing. Nendrum Abbey was founded by St Mochaoi on the instructions of St Patrick himself. 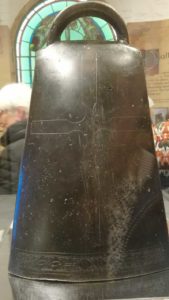 The second speaker, Dr Jonathan McMaster delivered a thought -provoking talk on the topic: Columbanus-Patron saint of a United Europe – what would he do now? Dr McMaster explored three themes linking Columbanus to the 21st century world. We are all pilgrims on a journey which is unpredictable and uncertain. Columbanus recognised the impermanence of human constructs, for example, empires.  Columbanus helped to construct a new Europe out of the ruins of an empire. He lived through a new beginning. Today we are all global citizens facing the global challenge of climate change. We need to apply an ethical approach to the challenges we face. Columbanus spoke truth to power and he was not afraid to do so. Speech ethics matter today in a world where words can be destructive at so many different levels in society. Indeed the present Pope has made reference to the ‘terrorism of gossip’.

There was an interesting Question and Answer session after the talks followed by a lovely lunch.

In the afternoon there was a guided tour explaining the pilgrim route that Columbanus took from Bangor to Bobbio following the Columbanus Bell Trail in Castle Park to the North Down Museum. In the museum is displayed the beautiful original bell used in the monastery.

On Saturday night there was a fantastic concert featuring the beautiful choir, Cappella Caeciliana followed by the award-winning group Celtic Storm who got the audience singing and toe-tapping in response to their lively programme of Irish music and dance.

The festival continued on Sunday afternoon with a talk about the saints illustrated in the beautiful stained glass windows in the St Columbanus Church, Bangor. The closing event was a cross-community church service to celebrate the life and legacy of Coumbanus with guest speaker, Bishop Noel Treanor.