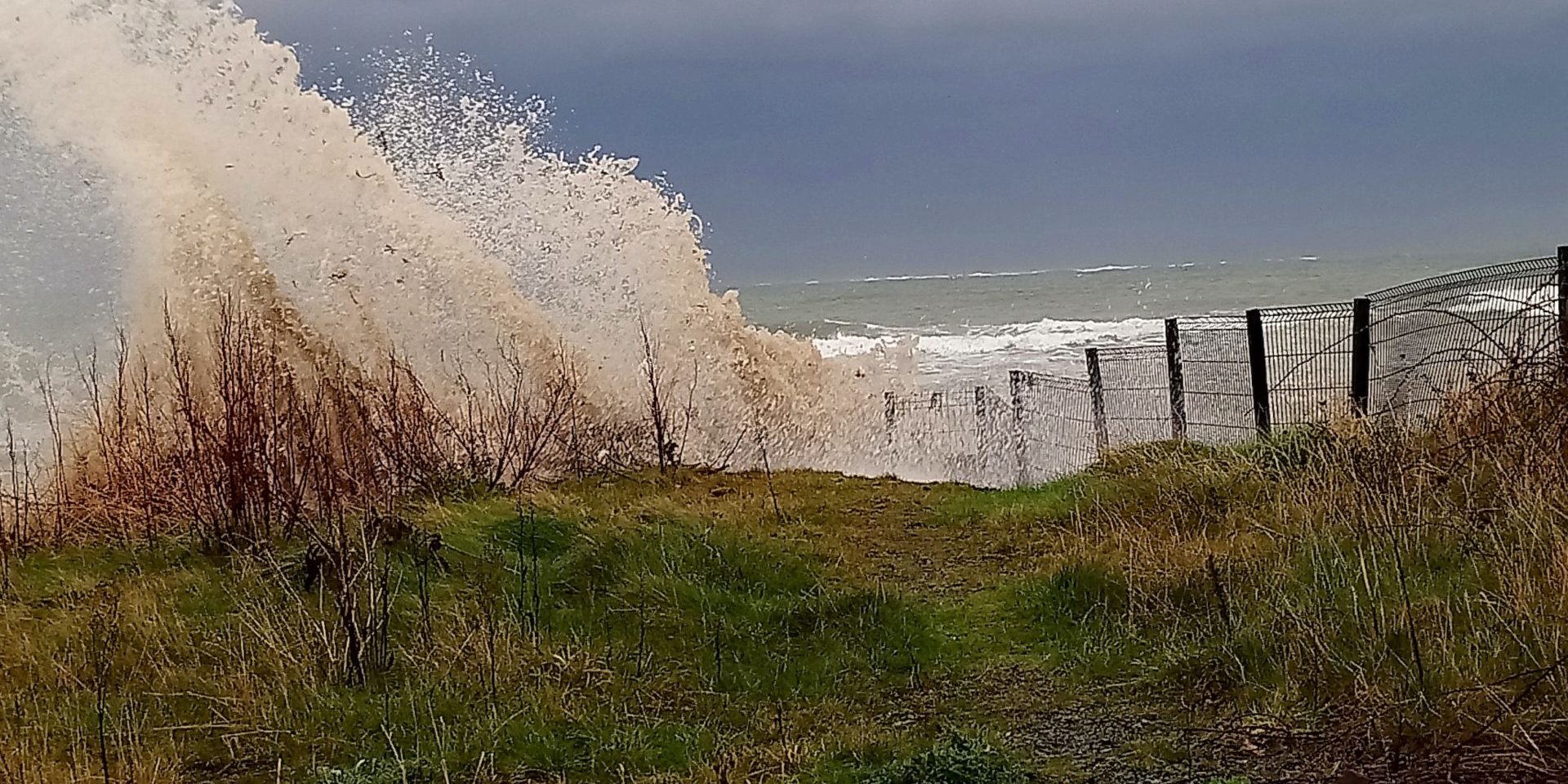 Storm Dennis battered the coastlines of Ireland and Britain at the weekend with heavy rainfall and strong winds gusting to 70mph. As I live on the coast of the Outer Ards Peninsula, and I am interested in climate change and its’ local impact, I went out on Saturday afternoon at high tide to record some of the impact of the storm. I decided to go to Slanes Point south of Cloughey village. The sea was very rough and powerful waves were pounding the coastline relentlessly. At first when I arrived and found a safe vantage point, I was aware of the sound of birds twittering in the trees and shrubs but as Storm Dennis raged the birds fell silent, maybe a sign that the birdlife sensed that all is not well with our natural world?

The erosion of the coastline was very clearly evident in the storm waters which were a brown colour due to the soil particles they were holding.  Metal fencing around the old water treatment works was ripped out by the sheer force of the wall of water. The landscape here is covered with a layer of glacial till which is loose unconsolidated material deposited during the Ice Age. This is easily eroded by the powerful waves battering the coastline and a look at historical maps of the area reveals the alarming rate at which the coastline in this area has retreated. I have observed evidence of coastal erosion at other locations along the Outer Ards coastline. One of the effects of climate change is that our winters will be wetter and serious storms will probably be more frequent.

The next day I revisited the area to see firsthand the impact of Storm Dennis. I include photographs showing the impact on a local scale. On a wider scale the storm caused loss of life in Wales and three days later large areas of Britain are still flooded due to the intense rainfall which accompanied the storm and flood warnings are still in place. At the weekend parts of Britain received a months’ rainfall in two days. On a local level, arable farmers have been unable to harvest all their vegetable crops because the wet weather means that the ground is too wet to bring harvesting machinery in. Historically the Ards Peninsula is one of the driest areas on the island of Ireland. 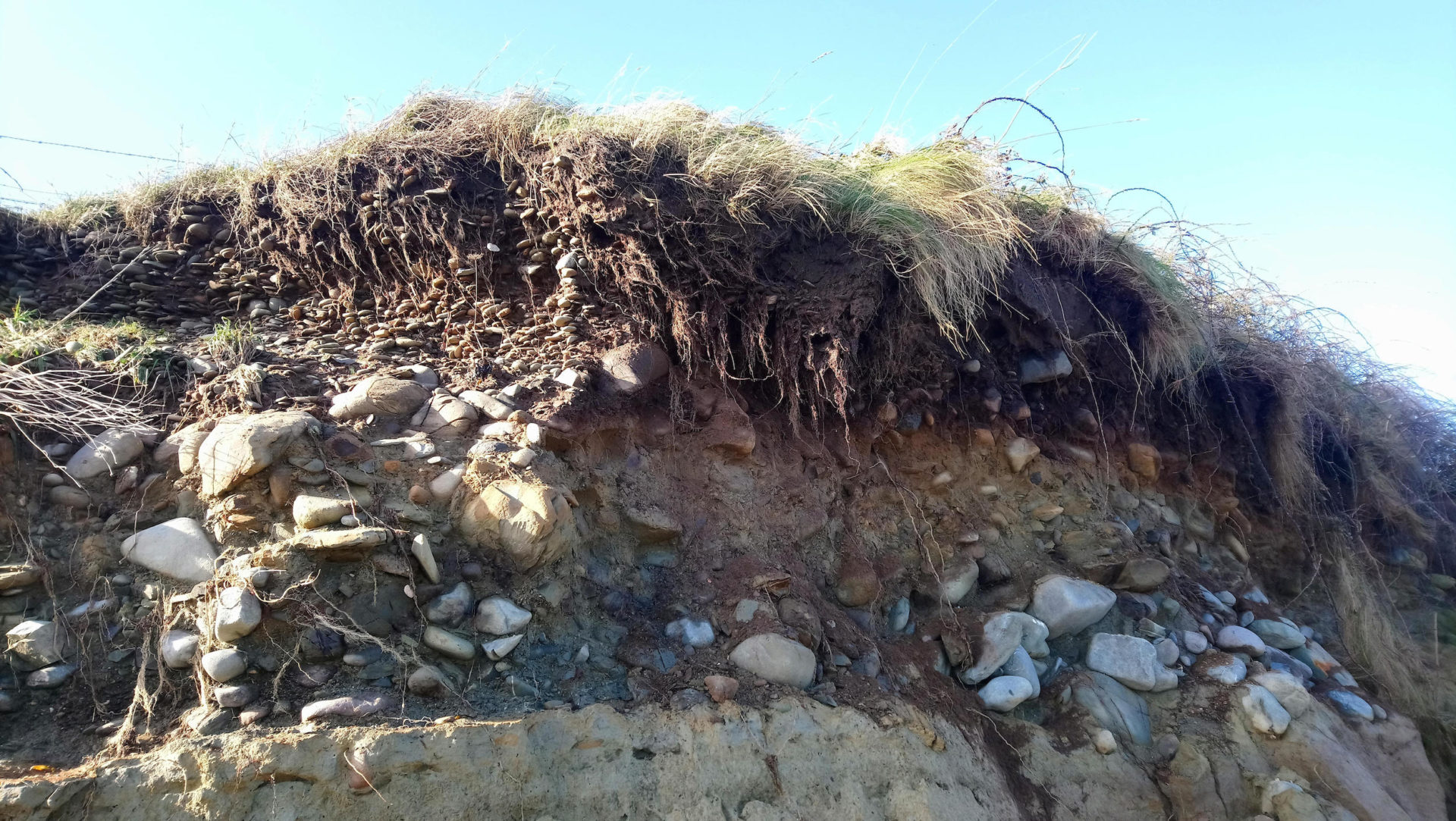 This raises questions including why are we getting more frequent storms and flooding and what should we be doing about this?

In simple terms human-driven global heating is resulting in a warmer atmosphere which in turn is able to absorb more moisture and this in turn leads to higher rainfall.

A global study predicts that temperatures in Ireland will increase by 1.33 degrees by 2050 and sea levels are predicted to rise by 40cm by the end of the century according to coastal geomorphologist, Professor Iris Moeller. The Ards Peninsula is a low lying landscape of rolling drumlin hills and it will be particularly at risk from rising sea levels. Many of the main roads on the peninsula hug the coastline so a rise in sea level could spell the demise of some of the main roads.

On a global level rising sea levels are already impacting island communities around the world and there will be serious consequences for many cities in coastal locations around the world including Amsterdam, Dublin and Belfast.

In future blog posts I will look at the need for a coastal strategy and wider themes including sustainability, sustainable development in tourism, biodiversity and climate change from the local and global perspective.